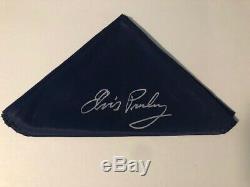 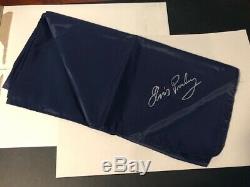 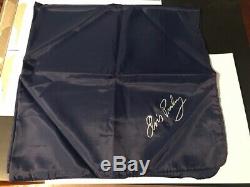 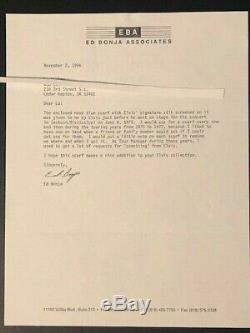 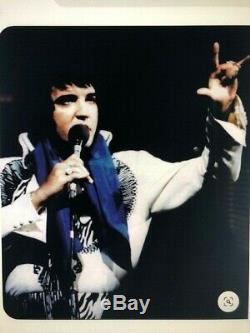 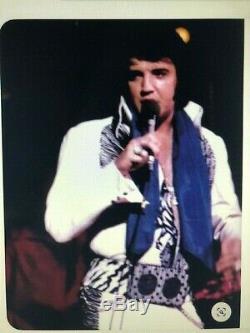 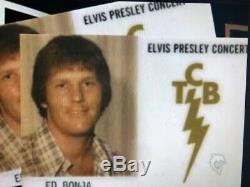 More Info On the Ed Bonja and Elvis Connection. Ed went to work on a full-time basis as an assistant to the Colonel and as the Elvis Presley Show Tour Managaer and Photographer until April of 1977.

Ed's first record album cover was "Elvis as Recoreded Live at Madison Square Garden", released in June of 1972. His photos appear on the covers of dozens of Elvis' LP albums, single sleeves and CD's. In the booklet with the 1970's box set (The Essential 70's Masters) RCA/BMG used twenty-six of Ed's photographs; and four of the five cover shots used for the individual CD's for that set were also Ed's work. Both the original covers and the remakes of the "Moody Blue" and "Raised On Rock" CD's by RCA/BMG feature several of Ed's photographs. Recently, Ed's photos have been featured in the FTD releases "I'll Remeber You", "Standing Room Only" and "Good Times".

I have also included a photo of the letter of provenance from Ed Bonja to the original owner - In case you cannot read it I have included how it reads below without using the original owners name. The enclosed navy blue scarf with Elvis signature silk screened on it was given to me by Elvis just before he went on stage for his concert in Jackson, Mississippi on June 9, 1975. I would put a little note on each scarf to remind me where and when I got it. As Tour Manager during those years, I used to get a lot of requests for "something" from Elvis.

I hope this scarf makes a nice addition to your Elvis collection. The item "Very Rare Elvis Presley Concert Navy Scarf Jackson, Mississippi June 9, 1975" is in sale since Monday, May 25, 2020.

This item is in the category "Entertainment Memorabilia\Music Memorabilia\Rock & Pop\Artists P\Presley, Elvis\Concert & Movie Memorabilia". The seller is "knight1972" and is located in Greenwood, Indiana. This item can be shipped to United States.