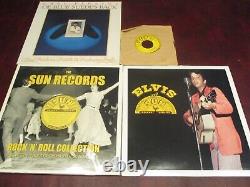 SUN RECORDS SAM PHILLIPS COLLECTION WITH EXTRA ADDITIONAL INDIVIDUAL LP'S BY CARL PERKINS AND ELVIS + A JEERY LEE LEWIS SUN RECORDS SINGLE WITH BREATHLESS & DOWN THE LINE. THE SUN RECORDS ROCK N ROLL COLLECTION 40 ROCKIN GREATS FRON THE SUN VAULTS ON 180 GRAM AUDIOPHILE VINYL FROM CHARLY RECORDS IMPORT SET. A comprehensive introduction to some of the most iconic and influential music ever recorded.

Roy Orbison "Cat Called Domino". PLUS WE ARE ADDING ELVIS AT SUN RECORDS 2004 BMG UK PRESSING OPEN VINYL WITH A SEAM SPLIT AT THE TOP OF JACKET BUT THE VINYL IS MINT NEW AND TREMENDOUSLY RARE ISSUE FOR COLLECTORS. This comprehensive single-disc set follows the formative early career of Elvis Presley and his transcendent body of work at Sun Records. Beyond essential, this collection includes all 15 of Elvis' original Sun singles (A & B sides) and rare alternative takes. Though they would eventually be hailed as nothing short of the birth notice of rock'n' roll, these seminal recordings--the product of a teenaged Memphis truck driver with virtually no public performance experience--were originally little more than energetic regional country hits that eventually led to a modest national record deal.

Elvis Presley's five Sun singles, along with nine additional demos and outtakes from the era, have been meticulously cleansed of the reverb and echo effects added to the later LP versions RCA issued during the singer's meteoric rise to stardom, yielding a restored clarity that may startle even veteran Presley fans. Of course, it's the performances themselves that remain indelible benchmarks of modern American music, a fusion of R&B, C&W, Tin Pan Alley pop, and irrepressible ambition that seemed wholly formed even on the first single's pairing of the Arthur Crudup blues "That's Alright" with a joyously supercharged revamp of Bill Monroe's Blue Moon of Kentucky. What the core trio on these recordings--Presley, guitarist Scotty Moore, and bassist Bill Black--accomplished in their brief tenure at Sun was as preternatural as it was groundbreaking, yielding a mindset and sound that continues to reverberate around the globe over a half-century later.

19 When It Rains, It Really Pours. OL' BLUE SUEDE'S BACK JET RECORDS PRESSING SEALED COPY. This is one of Carl Perkin's best albums from 70's! He was still one of the best original rock and rollers who never got the same credit Elvis and Cash and Holly and others got! His guitar playing, his singing, his songwriting were incredible!

Elvis didn't write anything! Here he salutes great rock classics including his own with a updated 70's rock feel. Ol'Blue Suedes Shoes was back!

HANG UP MY ROCK AND ROLL SHOES. Mymusicfix has been told we have the best collection of Rare, Out of Print music collectibles on E-Bay. International Buyers - Please Note. ACTORY SEALED OUT OF PRINT PRODUCT is IRREPLACEABLE and therefore NOT RETURNABLE. Because of Postal Regulations in following countries -- U.

(England, Ireland, Wales and Scotland), SOUTH AMERICAN COUNTRIES, QATAR, PHILIPPINES, SRI LANKA, ISRAEL, RUSSIA, MEXICO and MALTA. This item is in the category "Music\Vinyl Records". The seller is "mymusicfix2" and is located in this country: US. This item can be shipped worldwide.