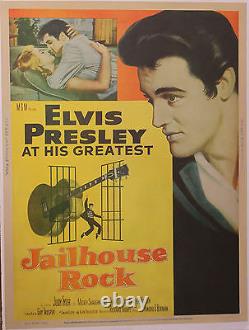 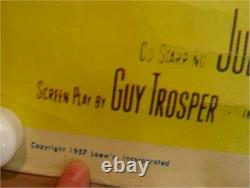 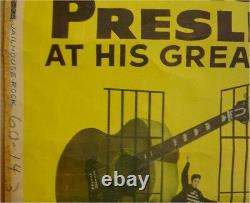 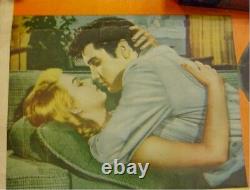 This is the 30x40" version, slightly larger than the standard one sheet of 27x41".. It is also on heavier stock paper, unlike the thin glossy style standard one sheet. We have seen the standard used one sheet (which we also have available below under Similar Treasures You May Like) which appears on the market now and then, but this particular poster we have here, based on our extensive research is the only one that has ever surfaced on the market!

In addition to the stunning life size image of Elvis it also has a unique inset (only Elvis "Jailhouse Rock" one sheet to have an inset) of Elvis and his Co-Star, leading lady Judy Tyler in the upper left. It is in very good condition but prior to professional paper-backing and minor restoration had some border wear and slight creasing mostly in the lower right corner area. Because it is on heavier stock paper and not thin glossy like standard one sheets it was never folded. Hence, it does not have the fold likes as all vintage standard one sheets do. Also, as most all heavier stock posters ths was professionally paper backed instead of linen backing to prevent creasing.

This poster dated "Loews 1957" in the left bottom border is an original 1957 release. However, It also has on the left border a handwritten NSS (National Screen Service) notation "60-143". This was because the poster was reused in 1960 to celebrate Elvis's return from the Army. There was a special poster created for the Elvis return 1960 release but this case they reused this very rare 1957 original release.

In celebration of Elvis' return from military service from Germany, "Jailhouse Rock" was re-released. Has long been considered, by both critics and fans alike, Elvis' finest film.. See enlargeable images above and below NOTE: It has been professionally paper-backed backed and looks AMAZING! And the chances you will ever see another one in this lifetime is highly unlikely!

See enlargeable images above and below.. One Sheet (27" X 41"). Starring Elvis Presley, Judy Tyler , Mickey Shaughnessy, Vaughn Taylor, Jennifer Holden, Dean Jones, Anne Neyland. In Elvis Presley's third film he portrays the wild but honorable Vince Everett who is sent to prison for killing a man in a bar fight.

He learns to sing and play guitar and quickly succeeds in the music industry when he is released, and learns valuable lessons about loyalty along the way. In this unforgettable picture, Elvis stars as a convict who serves a one year stretch in the pen on a manslaughter charge, only to emerge from prison as an overnight singing sensation! The movie features one of the greatest musical numbers ever caught on film as Presley performs the title song.

This is an incredibly scarce poster for the original 1957 release for one of the King's greatest films. The hair, the profile, the guitar... This poster from one of the King's most popular films includes all the images that the public has come to associate with the young, charismatic Elvis Presley.

Material from his pre-service films, and Jailhouse Rock in particular, are among the most eagerly sought of his film collectibles. And this is the only place you will see this extremely rare one sheet for this film.. Co-Star Judy Tyler After completing filming of Jailhouse Rock, Judy Tyler and her second husband, Greg Lafayette, left Los Angeles to drive back home to their apartment in Manhattan. While driving through Wyoming on July 3, 1957, they were involved in an automobile accident on U.

Route 30 just 3 miles north of Rock River. Judy was killed instantly and Greg died the next day at a hospital in Laramie. Elvis Presley, who co-starred with Tyler in Jailhouse Rock (1957) was stunned at the tragic news, never watched the movie after her death.

We recently contacted one of the top movie poster experts and researchers in the industry to see is he had any more information on this extraordinarily RARE poster. Here is his response: Im sorry for the delay in getting back with you.. But I couldnt find anything in the pressbook or any of our records so I wanted to check with several other sources before I got back with you and NO ONE that I have checked with has ever seen this poster before. Because it is an NSS issue and they had enough left in the warehouses to have them available for the 1960 campaign.. I would think that these were created after the initial campaign when they were expanding the market so they didnt get that wide of distribution.

Which would also mean they would have some left over for 1960.. But they didnt fit in with the 1960 (white) material campaign so they were never reprinted. Id say you have a nice one.. The item "Jailhouse Rock vintage movie poster one sheet Elvis Presley VERY Rare Style" is in sale since Friday, November 20, 2020.

This item is in the category "Entertainment Memorabilia\Movie Memorabilia\Posters\Originals-United States\1950-59". The seller is "cvtreasures" and is located in Saint Augustine, Florida.

This item can be shipped to United States, Canada.