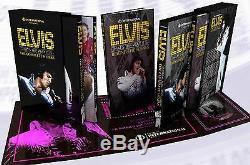 That's The Way It Is, The Complete Works. For the first time, fans now have a documented project on one of Elvis most popular movies. The new'International' label will release the spectacular 9 Disc/Book LIMITED EDITION box set imminently, with a run of only 999 copies being made available.

No more will be produced. Fans will have all complete six shows, recorded for the 1970 movie'That's The Way It Is' on 6 CD's and 3 dual layer DVD's filled with over 9 hours of complete shows with excellent edits, amazing multi angle sequences and much more.

In addition to this, a 125 page hardback book with lots of interesting facts and photographs accompanies the box set. The 6 CD's are complete from beginning to end and contains many unreleased live recordings and monologues (also some that were left out of previously released shows) that only the privileged few have heard before. Collectors will notice the different mixes even in previously released audio. The 3 Dual Layer DVDs video footage has been culled from over 50 different discs to find the best quality with thousands of hours put in to make the 9 hours of concert and rehearsal video contained in the DVD's. Collectors will note verses and sections cut out of songs in the original MGM edits now present in their entirety and in the proper sequence. The added multi angle sequences throughout the DVDs makes it a pleasure to finally watch in one go. Great care has been taken to give the fans a limited edition package that will provide hours of pleasure for many years to come. Show 1 : August 10 1970 Dinner Show Opening: 62.21. I Can't Stop Loving You. The Next Step Is Love. I Just Can't Help Believin. You've Lost That Lovin' Feelin. You Don't Have To Say You Love Me. Can't Help Falling In Love/Closing Vamp. Show 2 : August 11 1970 Dinner Show: 68.27. Show 3 : August 11 1970 Midnite Show: 78.34. A Thing Called Love Performed By'The Imperials. On The Other Side Performed By'The Imperials. Men With Broken Hearts Short Poem. Walk A Mile In My Shoes. Instrumental Break (Elvis Walks Through The Audience).

Don't Cry Daddy/In The Ghetto. Ed Sullivan & Milton Berle Show Dialogue. M: Thats The Way It Is. M Stage 1, Culver City, California. Baby What You Want Me To Do.

The International Hotels Showroom, Las Vegas, Nevada. You Don't Have To Say you Love Me. I'll Take You Home Kathleen.

The hardback book will differ from all previous collections in featuring all the Elvis pictures that have ever been seen with regard to TTWII, including the making of the whole project, and will include a lot of memos etc plus a lot more details than previous books. We are intentionally not using movie'screen grabs' that people have had before, instead a quality production of the complete collection of pictures that we have uncovered. The item "ELVIS PRESLEY THAT'S THE WAY IT IS THE COMPLETE WORKS BOXSET RARE LIMITED ED" is in sale since Tuesday, April 2, 2019. This item is in the category "Musica, CD e vinili\CD".

The seller is "elvis_forever2010" and is located in italia. This item can be shipped worldwide.