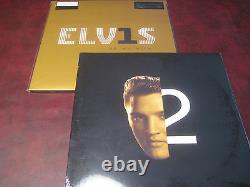 PLUS THE ALSO TREMENDOUSLY RARE 1ST EDITION OF SECOND TO NONE - FACTORY SEALED DOUBLE LP SET - NOW ALMOST DECADES OUT OF PRINT ORIGINAL RELEASE SET FROM 2003. ONE OF OUR LAST SETS FOREVER SO DON'T MISS OUT. COLLECTORS KNOW THAT ORIGINALS RELEASES ESPECIALLY FROM THE KING ARE AS COLLECTIBLE AS THEY GET.

THIS IS OUR ONE AND ONLY SET FOREVER. & TYPE IN BIGHITS OR FOR ELVIS TITLES USE CODE EPRESLEY INTO THE SEARCH FIELD WITHIN OUR STORES SECTION AS YOUR PERSONAL CODE FOR ALL INDIVIDUAL OUT OF PRINT TITLES + INFORMATION WILL APPEAR. The nicest thing you can do for your stylus and your ears. The ultimate record -- the way music was meant to be heard. You should never pass up the opportunity to upgrade your collection.

They're each very limited in their pressings and disappear with extraordinary quickness from the vinyl market. This causes prices to skyrocket because once they are gone, they are gone forever! Don't second-guess yourself with this chance to upgrade your collection because before you know it, the opportunity will have passed forever. Check out my other Rare Elvis items. TO NONE Double LP ORIGINAL COLLECTORS 2003 RELEASE.

The follow-up album to the No. 1 multi-platinum Elvis - 30 #1 Hits. Includes an exciting new remix of "Rubberneckin'" by DJ and producer Paul Oakenfold, plus the never-before-heard I'm A Roustabout. 2nd to None also includes five No. 1 hits that were not included on Elvis - 30 #1 Hits.

Disc One - Side One. I Forgot to Remember to Forget. I Want You, I Need You, I Love You. Wear My Ring Around Your Neck. Disc One - Side Two. I Need Your Love Tonight. You Don't Have to Say You Love Me. I'm a Roustabout Previously Unreleased Bonus Track. Rubberneckin' (Paul Oakenfold remix - radio edit) Bonus Track. Elvis Presley ELV1S 30 #1 Hits 180 GRAM LIMITED EDITION Import 2LP SET. 180 Gram Audiophile Vinyl Pressing! This 2002 compilation of #1 hits by the one and only Elvis Presley was inspired by the Beatles''1', which had became a worldwide hit in 2000. It was compiled using chart data from the pop singles charts in Billboard, Cashbox, New Musical Express and Record Retailer.

It is the first Elvis Presley album to feature the remix of'A Little Less Conversation' by Junkie XL that was released earlier that year and became a worldwide hit. The album was an instant success and ended up being Presley's first album to debut at #1 on the Billboard 200 and his first number one since 1973. 180 Gram Audiophile Vinyl Pressing. Import Selections: LP1 - Side A: 1. Don't Be Cruel 3.

She's Not You 8. (You're the) Devil In Disguise LP2 - Side D: 1. Crying In the Chapel 2. The Wonder Of You 5. Way Down Bonus Track: 7. A Little Less Conversation (JXL Radio Edit Remix). Mymusicfix has been told we have the best collection of Rare, Out of Print music collectibles on E-Bay. International Buyers - Please Note. FACTORY SEALED OUT OF PRINT PRODUCT is IRREPLACEABLE and therefore NOT RETURNABLE. International Buyers are responsible for their country's. This item is in the category "Music\Vinyl Records". The seller is "mymusicfix2" and is located in this country: US. This item can be shipped worldwide.