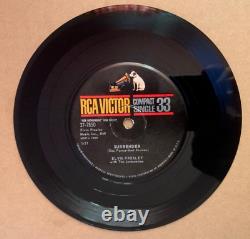 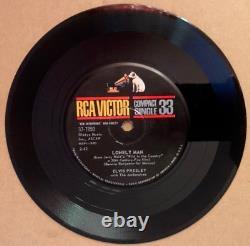 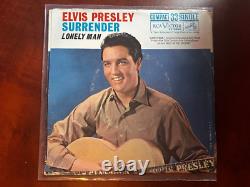 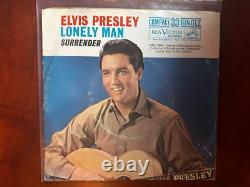 Watch out for reproduction, boots, fakes, and reprints of these Ultra Rare Compact 33 sleeves! This Sleeve has the typical wear for these Compact 33- Grade VG- or better no splits or writing typical ring wear (See pics). The Compact 33 disc/record is Mint - Looks almost new. Will certainly not have to upgrade the disc on this rarity!

Don't miss this if need in your collection! In 1961, RCA Victor Records released Lonely Man b/w Surrender on compact 33. The prefix (37) denotes compact 33.

The catalog (7850) is identical to the relatively common counterpart release as a 45 RPM (47-7850). This release was part of an industry-wide attempt to establish a one-speed record market which began in 1960, that was anticipated to phase out the 45 RPM within two to five years of it's introduction. Using big name artists, like Elvis Presley to propagate sales of the compact 33 in the direction of market domination should have been enough, however, it wasn't.

In 1961, 45 RPM record sales were climbing at a record pace, the major discount stores cut retail prices by nearly 22%, and lack of inexpensive automatic 33-speed singles player discouraged the promotion of the compact 33. All these factors and more attribute to the extreme rarity of this single. Interesting article from Jerry Osborne 2004. "History Repeats Itself" (Buddy Starcher) observation.

Note: this scarce series does not include the compact 33 EP ELVIS PRESLEY BY REQUEST FLAMING STAR COMPACT 33 in cardboard jacket which is widely available. Good luck and have fun hunting and collecting! Be sure to see my other Rare Elvis items and add to your favorites list.

This item is in the category "Music\Vinyl Records". The seller is "jess_wade" and is located in this country: US. This item can be shipped to United States.