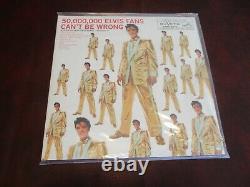 Elvis Aaron Presley was born during the Great Depression into a poor family in Mississippi. They moved to Memphis during the early fifties, and as a struggling young truck driver, Elvis cut some demos as a gift for his beloved mother Gladys. These initial songs, of which he had only paid a few dollars to record, would become the catalyst that would kick-start the beginnings of a soon to be worldwide superstar unlike the world has ever known. The folks at RCA Victor knew that this young fellow named Elvis was destined for superstardom. He would eventually become the most successful solo artist of all time! For the remainder of the 1950s, Elvis Presley would release several more hit albums, smash singles and movies before spending time in the Army. Ever proving that he was indeed on top of his game, RCA Victor awarded their superstar artist and his fans with the Kings second greatest hits collection Elvis' Gold Records Volume 2, also known as 50,000,000 Elvis Fans Cant Be Wrong. Featuring a treasure trove of his most familiar top charting hit singles Elvis' Gold Records Volume 2 went on to become one of his most memorable titles in his huge arsenal of masterful rock and roll albums, as well as one of the most copied album covers of all time. The 1959 album also was another blockbuster for The King as it topped the upper rungs of the pop charts, making this one of his biggest albums of his career as well as one of his most revered. Elvis' Gold Records Volume 2 truly proved once again that his career was unlike any other in music history. Elvis' Gold Records Volume 2 also included some of his finest ballads like Don't, My Wish Came True and the soulful Doncha' Think It's Time, plus more top rock and roll hits like I Need Your Love Tonight, and I Beg of You. In total, the album showcases ten important Elvis Presley hit recordings which have truly gone on to become definitive classics by any measure of popular music. In honor of the Man, the Music, the Legend, the King Of Rock And Roll, Friday Music is very proud and honored to announce the first time limited 55th Anniversary Edition 180 Gram Audiophile Vinyl release of the RCA Victor classic Elvis' Gold Records Volume 2 - 50,000 Elvis Fans Can't Be Wrong by Elvis Presley. As another installment in the exciting Elvis Presley 180 Gram Audiophile Vinyl Series, Friday Music is please to present this masterwork in all its high fidelity glory.

Mastered impeccably from Joe Reagoso at Friday Music Studios and manufactured at RTI, Elvis' Gold Records Volume 2 will be a much anticipated first time audiophile dream release for Elvis fans everywhere! For a limited time only, Friday Music is also including a rare first time gatefold artwork presentation including the original 1959 artwork elements and rare picture sleeve art in the inside gatefold. As usual, Friday Music is also enclosing a poly bag to protect your album cover and poly lined sleeve to keep your Elvis vinyl in mint shape. Elvis' Gold Records Volume 2...

I Need Your Love Tonight. Wear My Ring Around Your Neck.

International Buyers - Please Note. FACTORY SEALED OUT OF PRINT PRODUCT is IRREPLACEABLE and therefore NOT RETURNABLE. Because of Postal Regulations in following countries -- U. (England, Ireland, Wales and Scotland), SOUTH AMERICAN COUNTRIES, QATAR, PHILIPPINES, SRI LANKA, ISRAEL, RUSSIA, MEXICO and MALTA. Check out Mymusicfix for additional Rare Audiophile recordings or hit ME or STORES on this Title's Home Page to view our other items on E-Bay.

Mymusicfix has been told we have the best selection of Out of Print Audiophile music on E-Bay. Enjoy being one of the last few to own/collect this Rare Heavy Vinyl Recording of musical history. This item is in the category "Music\Vinyl Records". The seller is "mymusicfix2" and is located in this country: US. This item can be shipped worldwide.