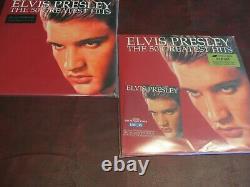 Heavy duty protective packaging of the product in the business. This deluxe REUSABLE packaging allows the owner a tremendous way to store that item once opened so it stays in pristine condition for the life of the product. No other company ever put this much cost into there packaging for collectors. PLUS WE ARE ADDING FOR COLLECTORS AS A RARE ORIGINAL 2000 RELEASE BONUS OF THE EXCLUSIVE UK SUN TIMES PROMOTIONAL COLLECTORS. FROM THIS RELEASE AND ELVIS "THAT'S THE WAY IT IS" SPECIAL EDITION.

THIS WAS ONLY AVAILABLE TO MARKET THE RELEASE OF THIS RARE 50 GREATEST RECORDINGS 3 LP SET FROM SIMPLY VINYL UK. THIS IS AS RARE AS IT GETS FOR COLLECTORS OF ELVIS PRODUCTS. This bonus promotional CD that was released by The London Sunday Times for this pressings release IN 2000.

It's tremendously rare Elvis collectors piece that has four tracks - HeartBreak Hotel - Return to Sender - Love letters & I Just Can't help Believin' - also includes promotional video of Suspicious Minds. PLUS AS A COMPARISON OR YOUR PLAYER AND KEEP THE ORIGINAL SIMPLY VINYL ISSUE SEALED FOR YOUR COLLECTION. Here, courtesy of Music On Vinyl, are 50 of Elvis Presley's greatest hits in one heavyweight triple LP package on 180 gram audiophile vinyl, completed with a stylish black & white info sheet. Covering all the hits from 1954's "That's All Right" up until "Way Down" (1977).

COLLECTORS NOTE : THIS IS A TREMENDOUSLY RARE ELVIS COLLECTORS SET THAT HAS BEEN OUT OF PRINT FOR YEARS. SO DON'T MISS OUT ON BEING ONE OF THE LAST PEOPLE IN THE WORLD TO OWN A SEALED COPY OF THIS ELVIS PRESLEY RARE VINYL COLLECTION. & TYPE IN BIGHITS OR FOR ELVIS TITLES USE CODE EPRESLEY INTO THE SEARCH FIELD WITHIN OUR STORES SECTION AS YOUR PERSONAL CODE AND ALL INDIVIDUAL TITLES + INFORMATION WILL APPEAR. Collectors Alert : Many of these Simply Vinyl Titles will never be available again.

Their license to produce these 180 Gram Masterpieces with Universal Records International has Ended. This means that this specific title is now out of print forever and there are very few remaining in It's Original Sealed Condition.

This title is going to skyrocket in value & price over the next few months. So Don't Miss Out on being one of the last people to own this outstanding pressing at this Special Holiday Pricing. SIMPLY VINYL IN FACT HAS NOW STOP PRESSING ALL 180 GRAM WEIGHT U. PRESSINGS AND HAVE DECREASED THERE WEIGHT TO WHAT THEY CALL HEAVY VINYL.

SO NOW ALL SIMPLY VINYL 180 GRAM PRODUCTS ARE OUT OF PRINT AND COLLECTORS GEMS. This pressing really covers Elvis in the almost every facet of his career from the early hits through his best live preformances.

A must for any true fan and an absolute pleasure to experience this rare selection of songs together for the 1st time on audiophile vinyl. You will immediately understand why he was and is the KING.

Don't Miss Out because once these very limited editions are gone they are gone forever and this collectors set will tremendouly skyrocket in price. Simply Vinyl (made in England - has the best protective packaging Ive seen) high-definition Virgin Vinyl pressing for superior fidelity. The nicest thing you can do for your stylus and your ears. The ultimate record -- the way music was meant to be heard and of superior quality for any Audiophile. Featuring 50 of the Best Classic Elvis Songs! A True Fan's Must-Have! NOTE: SAME TRACKS ON BOTH ISSUES. Elvis musical influences were the pop and country music of the time, the gospel music he heard in church and at the all-night gospel sings he frequently attended, and the black R&B he absorbed on historic Beale Street as a Memphis teenager.

In 1954, Elvis began his singing career with the legendary Sun Records label in Memphis. By 1956, he was an international sensation. With a sound and style that uniquely combined his diverse musical influences and blurred and challenged the social and racial barriers of the time, he ushered in a whole new era of American music and popular culture. He starred in 33 successful films, made history with his television appearances and specials, and knew great acclaim through his many, often record-breaking, live concert performances on tour and in Las Vegas.

Among his many awards and accolades were 14 Grammy nominations (3 wins) from the National Academy of Recording Arts & Sciences. In America alone, Elvis has had over 150 different albums and singles that have been certified gold, platinum or multi-platinum by the Recording Industry Association of America (RIAA). Elvis has had no less than 149 songs to appear on Billboard's Hot 100 Pop Chart in America. Of these, 114 were in the top forty, 40 were in the top ten, and 18 went to number one. His number one singles spent a total of 80 weeks at number one. He has also had over 90 charted albums with ten of them reaching number one. These figures are only for the pop charts and only in America. He was also a leading artist in the American country, R&B, and gospel fields, and his chart success in other countries was substantial.

Wear My Ring Around Your Neck. A Fool Such As I.

A Big Hunk O' Love. The Girl Of My Best Friend. It's Now Or Never. (Marie's The Name) His Latest Flame. Can't Help Falling In Love.

The nicest thing you can do for your stylus and ears. The ultimate record - the way music was meant to be heard - superior quality for any Audiophile. International Buyers - Please Note. FACTORY SEALED OUT OF PRINT PRODUCT is IRREPLACEABLE and therefore NOT RETURNABLE. Because of Postal Regulations in following countries -- U.

(England, Ireland, Wales and Scotland), SOUTH AMERICAN COUNTRIES, QATAR, PHILIPPINES, SRI LANKA, ISRAEL, RUSSIA, MEXICO and MALTA. Mymusicfix has been told we have the best collection of Rare, Out of Print music collectibles on E-Bay.

This item is in the category "Music\Vinyl Records". The seller is "mymusicfix2" and is located in this country: US. This item can be shipped worldwide.